The simple solution to schoolyard loneliness 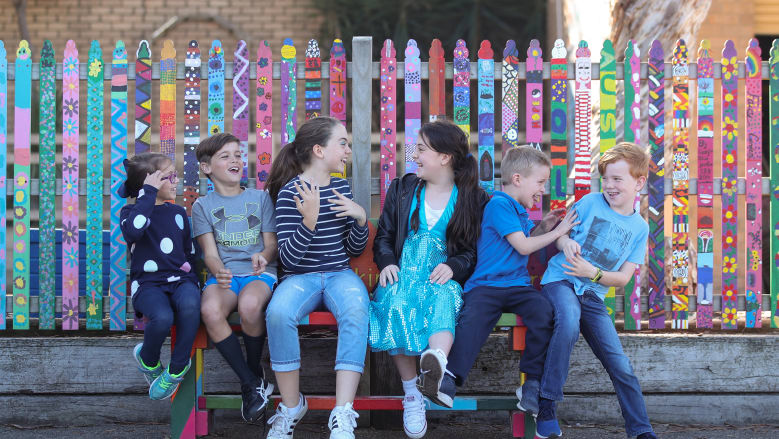 It’s a simple solution to the age-old schoolyard problem of loneliness.

When a student at Our Lady of the Assumption Parish Primary School feels isolated they wander over to the rainbow “buddy bench” and sit down.

Within minutes, one of their peers will approach them with a smile, ask if they are okay and invite them to play.

Thousands of buddy benches have cropped up at schools around the world over the past few years as part of a movement to stamp out loneliness and foster friendships.

“Being outside in a playground is very easy for a lot of children,” she said.

“But it can also be a time of anxiety. It’s everyone’s responsibility to be looking out for one another.”

While the Catholic school goes out of its way to help students feel connected, new research released by the Australian Council for Educational Research suggests Australian schools could be doing more.

According to the report, Australian students lag behind their peers in OECD countries when it comes to feeling a sense of belonging at school.

More than one in five students reported that they felt like an outsider and awkward at school, while 16 per cent said they were lonely.

The research was based on 2015 data from the Programme for International Student Assessment, a test which pits the world’s 15-year-olds against each other every three years.

It prompted students to respond to six statements about their school, including “I feel like an outsider at school”, “I feel lonely at school” and “I feel like I belong at school”. These responses were used to create a sense of belonging index for each country.

The research found Australian students’ overall sense of belonging had dipped significantly since the assessment was first rolled out 15 years ago.

But there were also some positive signs. Australian students eclipsed the OECD average when it came to making friends easily at school and reporting that other students liked them.

“It’s tied to emotional and educational success, to long-term health and wellbeing and it means children are more likely to engage in school activities,” she said.

Year 6 student Sophie sat down on the buddy bench earlier this year after finding herself alone one lunchtime.

Her father had built the bench for the school three years earlier, hammering it together in the family’s shed.

Parents are now paying more than $37,000 per annum for year 12 students at some of Sydney’s elite private schools. But is there an academic benefit to paying all that cash?

“I went over to the bench and sat there for a little while and a girl from year 6 who I hadn’t spoken to for a very long time came up to me,” she said.

“She asked if I was alright and if there was anyone I wanted to play with. Now I’m best friends with this girl.

The Danger of Self-Protection in Relationships
October 22, 2018
Go to Top